In the first part of the article regarding the Game Dev Fundamentals presentations,we told you about the essence of the event and we showecased the final projects of half of our students graduating the first year of their studies at ARC Academy. In part two of the article, we will complete the picture, and present you the progress of the other half of the students.

We will start with the intriguing project of Marin Bankov. For the finale of the year, he had made a short film in which he presented his idea for a game. Marin introduced us to HE.R.O.U., the healer robot and the world that he inhabits. He showed us the process of creating the character, the assets, the atmosphere.

In addition, Marin has partnered with Maria and together they managed to realize another idea: a playable demo of the game Tomika. The story behind Tomika is inspired by Maria’s personal life and precisely by her timid pet. In the visually impressive demo, we experienced the dual world of the dog Tomkia, which has the ability to see in parallel universes. Marin and Maria define the genre of the game as psychological horror. 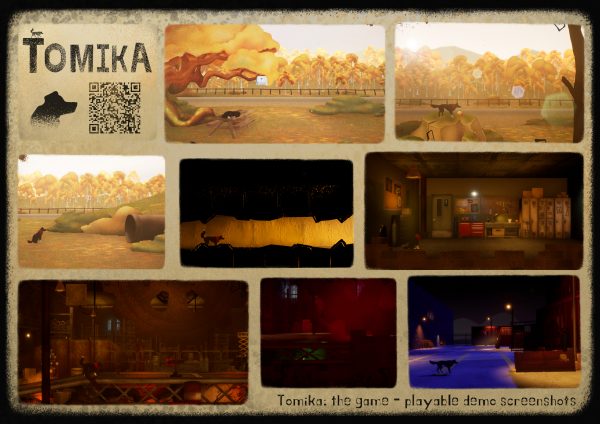 The presentations continue with that of Boris Stamatov – Project Sin. His game tells the story of a mysterious orphaning of an aristocratic child who must trace the fate of his missing family throughout the game. In addition to a summary of the story, Boris introduced us to his process of creating characters, accessories and mechanics.

Vasil Milchev, for his part, presented us with an impressive 3D Environment scene. It was largely inspired by the game “The Last Of Us” and more precisely a scene of a destroyed subway tunnel. Vasil told us about his extended research on how a tunnel like this is build in the first place. He spoke about  his initial concepts, how he directed the audience’s attention to the center of the composition and showed us different stages of modeling, texture, lighting and rendering.

Then Wanda Kolev presented her project. She had the idea for a game in which in the distant future the earth’s surface has disappeared or at least is uninhabitable, and people are forced to live in the clouds or deep in the sea. Wanda delved into parts of this world, presenting various concept environment projects for Nubilum – the celestial world. There, the inhabitants live in stations inspired by flying creatures.

Vladimir Stanimirov introduced us to his concept of a game in which there is an epidemic of monsters on Earth. Inspired by games like Bloodline, Dark Souls and Witcher, he showed us his solutions for races and characters that have different stories, looks, mechanics and gameplay in general.

The next student was Dorothea Yankova, who, driven by her love for the sea, presented her aquatic world with its respective creatures and buildings that inhabit it.

Dark Forest was the concept for a game that Eduard Hachikyan had been working on for the past few months. During his presentation he introduced us to the process of creating the world of the dark forest. We saw initial sketches, he took us through his brainstorming and showed us the process of completing various environment concept works.

Joanna told us about her evolution in painting in a truly extraordinary way. She used the metaphor of a caveman, given her original artistic skills, and spoke about the process of becoming a true modern homo sapiens throughout her training at the ARC and especially at the end of the Fundamentals.

After the interesting project of Martin Sheyretov for 2D platformer RPG, Radina showed us her museum of creativity, which was inspired by the Italian Pitti. In it she combined her love for 2D and 3D art.

Stefan Zarkov showed us renderings of the environment he created. He showed us his references and inspiration, 3D models, textures and finally even a short cinematography. Stella showed us the stages of creating her charming character from initial sketches to a completed 3D model.