Before proceeding to completion of the game, however, our students had to go through another key milestone – the Beta version of the game.

It was this stage that they presented to us on 06.06.2021. The presentation was aimed not only at demonstrating the development of the game. It was also the time for the students to receive the much needed feedback from the lecturers in the program, who had the task to give new criticism, guidance, and goals to the young game developers. 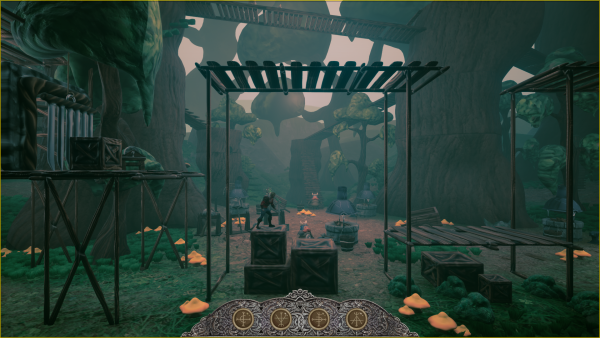 The day began with a presentation of the most important things that students had worked on since the Alpha version, such as correcting stylistic errors and inaccuracies, perfecting the characters and important assets in the environment, and rethinking the overall atmosphere and mood of the game. The students had made sure that Caim came as close as possible to its original idea of ​​a gloomy alternative Scandinavian world inhabited by trolls and dwarves. They successfully replaced the cheerful and pleasant color scheme with a mysterious and menacing night atmosphere, brightened only by the beautiful lighting, for which the lighting artists of the team had made great efforts.

Similar to the presentation of the Alpha version, the day continued with a live demo of the game in the presence of the lecturers.

During this stage we witnessed a tangible improvement in the mechanics and level design of Caim. Through concentrated effort on fewer environments and levels than originally created, the students had achieved a truly captivating effect on the player and solid logic in the course of the game.

The presentation came to an end with lengthy discussions about the future of Caim, expected improvements and plans for resolving problem areas in the Beta version, which should be seen in the long-awaited Gold.

In conclusion, we can say that once again our students left us in awe by the growth of their project. We are impressed by how far a little constructive criticism and guidance from our lecturers has taken them. They managed in a relatively short period of time to achieve a new level of aesthetics in the game art. In addition, they were able to resolve challenging dilemmas in the work process, such as the distribution of roles and tasks in the team, correspondence, seeking criticism and game testers, structuring commitments and much more.

We can only guess what the students from Game Dev Advanced will present to us for the final Gold version – but we can’t wait to find out.